Menu
Log in
Register
Menu
Install the app
You are using an out of date browser. It may not display this or other websites correctly.
You should upgrade or use an alternative browser.

Olympics gold my dream, training hard for it: Mary Kom

Olympics gold my dream, training hard for it: Mary Kom 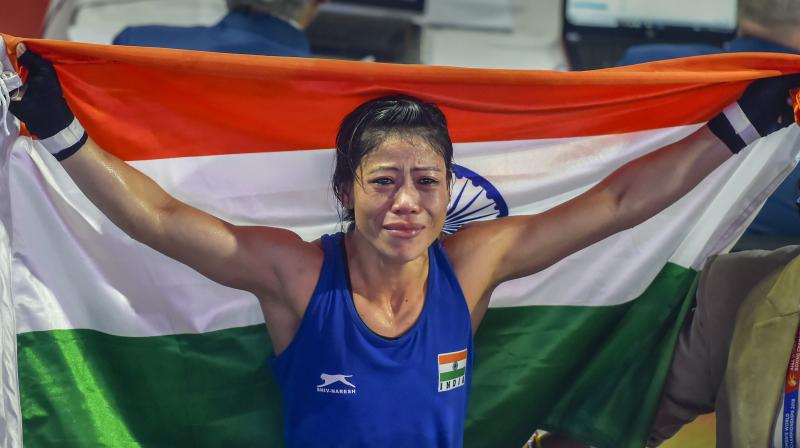 "I have a medal in Olympics (a bronze in 2012), but gold is something I dream for,”
said Mary Kom, who had recently clinched her sixth World Boxing Championships gold.


New Delhi: A sixth world title added to her cabinet, ace Indian boxer MC Mary Kom Wednesday said she is now aiming for a gold in the Olympics.

The 36-year-old claimed her sixth gold at the world event, making her the most successful boxer in the tournament's history with an overall tally of seven medals.

"I have a medal in Olympics (a bronze in 2012), but gold is something I dream for. I am very happy about my championship win, as it boosted my confidence to face life head-on," she told reporters on the sidelines of an athletics event here.

"I am eyeing a gold at Tokyo Olympics. I will train doubly-triply hard to get a gold for my country," she said.

Mary Kom won her world title in the 48kg category but for the Olympics, she will have to bulk up to the 51kg division.
Union Minister for Women and Child Development Maneka Gandhi, who was also present at the function held at the JLN Stadium, called Mary Kom a "national treasure".

"She has won six world titles and we are happy that she administered a pledge to the children present here on keeping the fairness and sportsmen's spirit in any game," Gandhi said.

Mary Kom, during her interaction with the media, said a disciplined training regimen is what keeps her bout-ready at all times.

"I have been very sincere during my training. If I have 2-3 sessions, I will make it a point to not miss them, I attend as many as possible. If I don't train, I won't succeed," she said.

Asked if her training schedule will undergo any change keeping the Olympics in mind, the Manipuri said she will talk to her coach and the Boxing Federation of India (BFI) to work out her plan.